360 Play set to open at Kingfisher

We are pleased that leading national family entertainment centre brand 360 Play will become part of Kingfisher Shopping Centre in February 2017.

Following the success of four existing 360 Play venues in Milton Keynes, Stevenage, Leicester and Basildon, DP Leisure (DPL), operator of the 360 Play has announced that it is to open a fifth UK site in 2017, at the Kingfisher Shopping Centre in Redditch, Worcestershire.

Already firmly established as a leading brand name within the UK’s children’s entertainment centre sector, the newest 12,000 sq ft 360 Play unit will be located within Redditch town centre at the Kingfisher Shopping Centre, a departure from the norm as far as the location is concerned with all the other 360 Play venues being sited on leisure parks or similar.

Kingfisher Shopping Centre is home to a diverse range of retail stores and food and beverage outlets. The addition of 360 Play will bring a whole new offer to the centre as a retail and leisure destination for families.

The opening of the latest 360 Play venue is scheduled for mid-February 2017 and will be home to all the classic 360 Play elements, which have proved so popular with families with young children over the years. 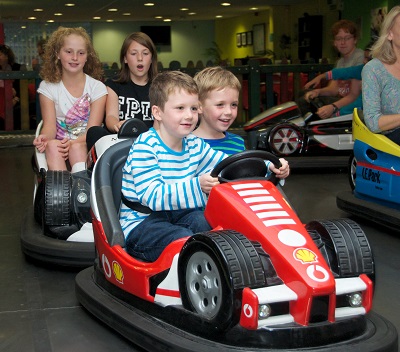 The new concept will follow the company’s tried and tested formula with a wide range of activities for all young children, from toddlers up to age 12, and with everything designed so that adults can join in too, it will be a true family day out offering. Among the attractions will be a two-storey play structure, bumper cars, a carousel and the 360 Street creative play zone, a feature at all 360 Play sites. This is made up of individual play units such as a fire station, supermarket, pizza parlour, vets, car garage/body shop and dressing up shop and is designed to stimulate the creativity in young minds, while also providing an opportunity for parents to get involved in play with their children. A party zone offering a dedicated area for children’s parties will also be included.

“We are delighted to announce the planned opening of our fifth 360 Play family entertainment centre in the UK,” said Duncan Phillips, Managing Director at 360 Play, “and are particularly excited to be moving into a shopping centre location. This is obviously something totally new for us but we are confident our offering will complement what is currently available to shoppers and will become a key element for visiting families with young children. The retail experience these days is changing in many ways and this is a great opportunity for ourselves and Capital and Regional to create a genuine retail and leisure destination and to provide a new experience for visitors.

“We offer a unique product concept and will create a fun, stimulating, engaging and entertaining family play facility based on the successful model we have previously used. I’m sure it will be very popular with families with young children from throughout the area. We can’t wait to start the build.”

Ken Ford, Executive Director, said: “We’re delighted to welcome 360 Play to Kingfisher Redditch. When it opens in February, it will offer our customers an entertainment offer that will be unrivalled in the area. As the first 360 Play to open within a shopping centre environment, I believe it will not only provide very exciting leisure amenities for children and families, but will also enhance our wider retail and food and beverage offer.”

The design and masterplanning of this latest project has been carried out by DPL’s sister company DP Associates (DPA), which will project manage the build, while pre-manufacturing of many of the key play elements and structures that will be housed within the shopping centre location is underway in workshops at DPL’s headquarters in Milton Keynes.