Capital & Regional is pleased to announce that it has completed deals with Burger King, El Taco Loco, Krispy Kreme, Costa Coffee and Mr Simms at The Mall Blackburn. The arrival of the five new operators is part of the landlord’s move to develop a diverse casual and family dining offer to complement the retail provision. 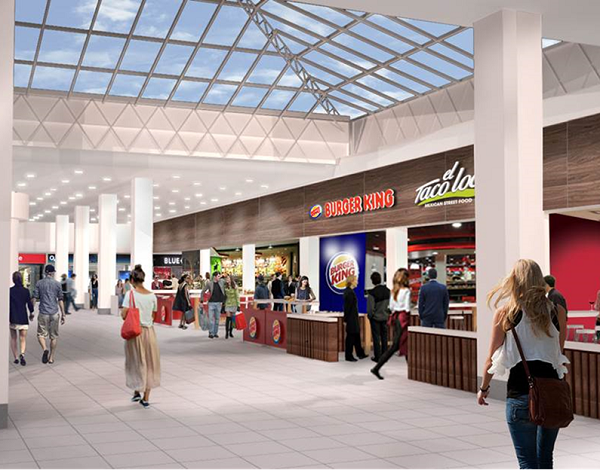 Global fast food chain Burger King and El Taco Loco have taken 4,300 sq ft of space at units 5-7 Victoria Court, with both stores due to open in December. American doughnut and coffee chain Krispy Kreme has also taken 300 sq ft for a new box cart format which will open in Victoria Court February next year.  Mr Simms Olde Sweet Shop, specialists in old fashioned confectionary have taken 1,300 sq ft of space on Market Way. Capital & Regional has also exchanged with Costa Coffee on Ainsworth Street and will be their second store in the Mall. This follows completion of the £3.5m Ainsworth Street refurbishment earlier in the year. Costa has taken a 1,500 sq ft unit, due to open in December further boosting the food and beverage offer in Blackburn town centre.

The deals follow on from new lettings with Muffin Break and Greggs.  GAME are also fitting out and relocating on King William Street and have upsized at ground floor following positive trading.

Will Blake, Asset Manager at Capital & Regional, said: “We are delighted to have completed deals with these fantastic operators. The deals with Burger King, El Taco Loco and Krispy Kreme form part of our plans to reposition and introduce fast casual dining in Victoria Court; providing customers with seating in a bright and covered environment in the heart of the Mall. These operators will complement our existing offer, increase dwell time, vitality and atmosphere in The Mall. We look forward to continuing this momentum and securing further occupiers in the near future.”

The Mall Blackburn, which comprises 600,000 sq ft of retail space, is located in the heart of Blackburn and has an immediate population catchment of 460,000. The centre, acquired by Capital and Regional in 2004, is well let to over 100 occupiers, including Primark, Debenhams, BHS and Next.