To support local Luton children with home schooling, The Mall Luton has donated a total of 38 laptops to Luton Learning Link to help local children who have no or limited ability to access remote learning. 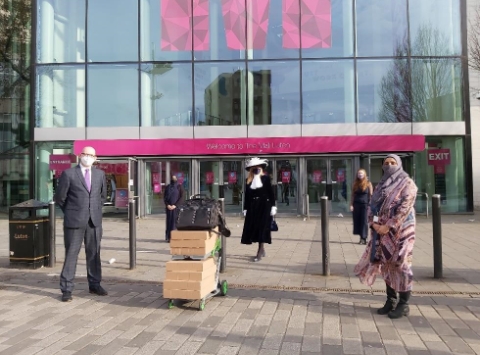 On Thursday 24th February, Roy Greening, General Manager at The Mall Luton, was delighted to hand over the laptops to representatives of Luton Learning Link, including the High Sheriff of Bedfordshire, Susan Lousada.
Organised to enable young people to access the technology they need for learning, The Mall has been working alongside Buy-Macs, a store within The Mall. Buy-Macs have assisted the centre with sourcing and wiping laptops, and also donated a number of laptop boxes free of charge.

Roy Greening, General Manager at The Mall Luton, commented:
“As one of our stores and an essential local charity, we’re thrilled to be able to support Level Trust, who helped to form Luton Learning Link and this fantastic initiative. A special thanks also goes to Buy-Macs who helped source and wipe the laptops free of charge.

Roy continued: “A total of 38 laptops were donated as part of Luton Learning Link’s campaign and have been distributed to benefit local children and families who have previously been unable to access digital technology.”

Susan Lousada, High Sheriff of Bedfordshire, added:
“I would like to send my heartfelt gratitude to The Mall Luton for so generously donating 38 laptops. This kind donation means 38 more smiles on children’s faces as well as directly benefitting families and young people within The Luton community. By supporting our initiative, The Mall has played an important part in reducing digital poverty in Luton and I am hoping other businesses will also help us to put more smiles on more faces!”

In Luton 46% of young people live in poverty. Poverty means young people do not have all the equipment they need for learning from home, including a digital device and Wi-Fi. Without a device to work on at home, young people fall behind in their studies and miss out on developing key skills when compared to their peers. Schemes such as this are critical to ease young people’s fears and uncertainty about the future.