Refurbishment of The Mall to kick-start regeneration of Maidstone

Below is an article published in Property Week focussing on the development of Maidstone and the impact that Capital & Regional's development of The Mall has had.

Refurbishment of The Mall to kick-start regeneration of Maidstone

The centre opened in 1976 and bore all the hallmarks of a first-generation shopping centre. With dated canopy entrances and lattice ceilings, it was a product of its time and, beyond a few minor facelifts, little had been done to modernise it in the last 25 years.

Capital & Regional, which bought the centre in 2004, has embarked on a £5m refurbishment - due to complete this month - that will pave the way for a £100m redevelopment of Maidstone town centre; plans the community shopping centre specialist is developing with the council.

“There was a disconnect between the ground and upper floors, the retail fascias were hidden away and the entrances were dated,” explains Mark Bourgeois, executive director of Capital & Regional. “The original treatment was fairly unimaginative - we saw an opportunity to address all these things with physical changes.” 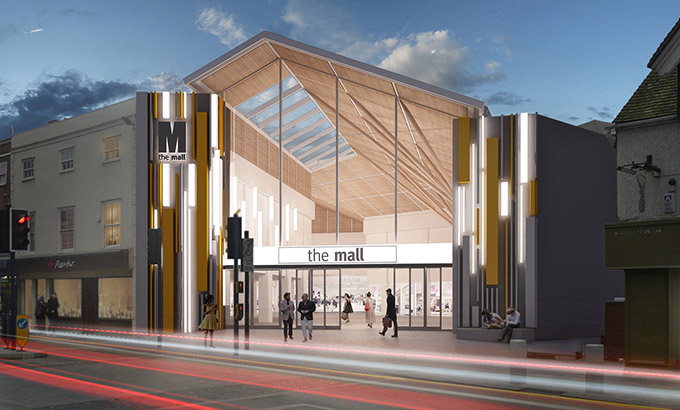 New flooring has been installed, the malls have been opened up, old-fashioned balustrades replaced, sightlines improved and natural light optimised.

Improving permeability between the centre’s levels was a major objective. The main mall, Duke’s Walk, has been widened, allowing people on the ground floor to look up and see the retailers above, helping to draw them up onto the first floor.

Capital & Regional has also been flexible, carving up a unit adjacent to the main entrance in order to frame a more welcoming entryway into the scheme. And the frontages of the retail units have been extended vertically, giving tenants more space to express their brands.

“Flexibility is absolutely at the heart of the business,” says Bourgeois. “It’s crucial that we meet the requirements of modern retailers so we’ll do all we can to accommodate those who want to expand, adapting space to suit both tenant and customer needs.”

Further, bigger changes may soon take place. Maidstone Borough Council has predicted that 300,000 sq ft of new retail space is needed in the town by 2030 if it is to satisfy the demand of a growing population.

An extension at The Mall Maidstone and the creation of a new department store would go some way to providing it, though for now it is an idea early in its conception with detailed plans yet to be drawn up.

Leisure will also need to be catered for. The town does not have a cinema and while there is a restaurant offer, Bourgeois says it is not necessarily of the degree or quality one might expect for a town the size and strength of Maidstone.

It is hoped Capital & Regional’s initial investment will build momentum, helping to attract new tenants - the firm will launch a leasing campaign on completion of the refurbishment - as well as stimulating investment activity in the rest of the town.

“The council is being incredibly proactive in meeting local needs and making Maidstone an even more desirable place to live and work,” says Bourgeois. “We own a big slug of the town centre and it makes sense that we’re aligned with the council’s vision and have input into the masterplan for Maidstone.”

“The initiatives go beyond retail but it’s a good bedrock and the spin-offs are many,” he adds. “What we’re doing is a good catalyst for unlocking future development.”

Read the original on Property Week.